skip to main | skip to sidebar

The Honda Super Cub is Back! 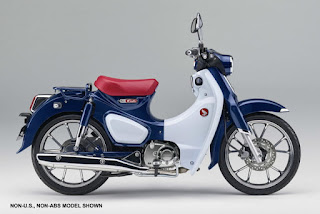 Saints be praised, it's a bona fide miracle.  Honda, having kept the Super Cub away from US enthusiasts since 1983 (the last year the "Passport C70" was sold in America) has finally decided it's time for it to make a comeback!  The 2019 Honda Super Cub C125 is available in Honda Powersports dealerships across the country!

Honda announced this news in late 2018, but decided to wait until bikes were actually being delivered to dealerships to post anything, and I am now pleased to say that, yes, it is, no joke, really happening.  Although allocations are small, anyone in the US wanting to buy a genuine Honda Cub can go to their nearest dealer and put in an order.

There are two reasons why I am excited about the 2019 Cub:  first, because Honda has designed this year's model to be much closer in appearance to the classic C100/C102 of the 1960's compared to, say, the 2013 model year, which IMHO looked more like a Honda Wave/Innova than a Cub; second, because Honda has loaded up the 2019 model with many new features, such as:

A few downsides:
So, with the exit of the Symba in 2016, at least Cub enthusiasts have a new (and totally unexpected) option!

I have to say, IMHO the 2019 Honda Super Cub is superior to the SYM Symba. Not just because its a Honda, although that's a big part of it, but because of the fidelity the bike has to the Super Cub legacy.  You just can't beat that.

Of course, if you own a Symba, you have a great bike - so, enjoy it!
Posted by Harald Dahl at 3:38 AM No comments:

Symba Sails Into the Sunset 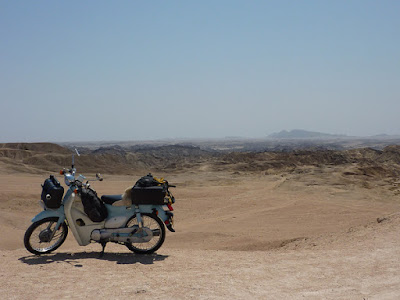 Alas, I'm afraid there is sad news for Symba fans.  After over 40 years of continuous production, SYM has ceased manufacturing the Symba. Alliance Powersports, SYM's authorized distributor in the USA, now lists it as a "discontinued" model.

Perhaps a brief recount of the history of the Symba is fitting at this point.  SYM, known in Taiwan as San Yang Motorcycle, manufactured the Honda Super Cub (C100, C102, CM91, C70M, C70, etc...) under license by Honda from 1961 to 2002, and from that point on continued the line independently, enhancing and improving the design through 2015. The final version, the Symba 110, was the model that SYM exported to the USA from 2009 up until sometime last year, to the delight of Super Cub fans in the States.

Although I didn't see this coming, I probably should have. Having lived in Taiwan since 2013, I can't help noticing how rare it is to see a Symba among the throng of scooters on the streets of Taipei and other major cities on the island.  For a while the model seemed to hang on as the mainstay delivery vehicle of the Taiwan Post Office.  I don't know the export sales figures, but, apparently they are no longer enough for SYM to keep the Symba in production.

GearChic Takes the Symba for a Spin

The San Francisco-based motorcycle blog GearChick has posted a review of the Symba.

"... if you had Honda's original version of this motorcycle, or you're a new rider just looking for something to ride instead of the bus, to save gas and have fun doing it, then you'll love this".

At Least She Pulled Over to Text... 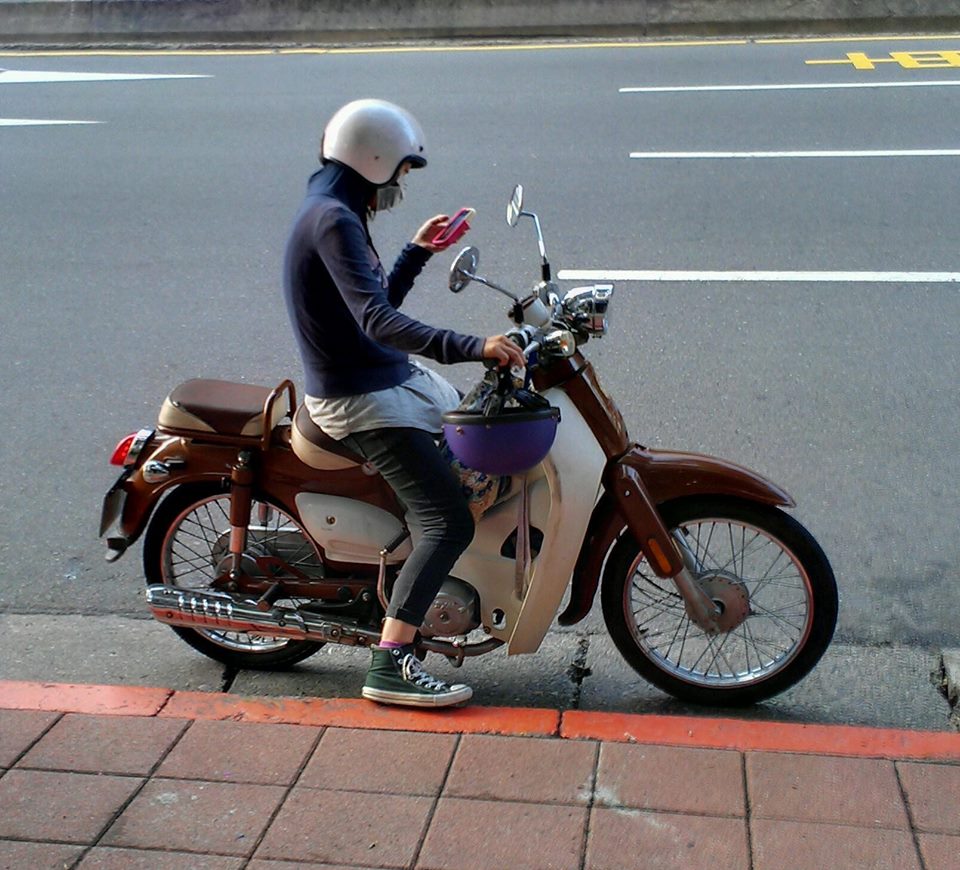 Here's a Symba in a rather rare color - Brown! It was one of the available colors in Taiwan for the 2009-2011 model years.  It has never been available in the USA, and is no longer available even in Taiwan. This particular rider is, for Taiwan, pretty geared up, with a 3/4 helmet, long sleeves and long pants.  But the sneakers?  Ugh!
Posted by Harald Dahl at 10:22 AM 1 comment: 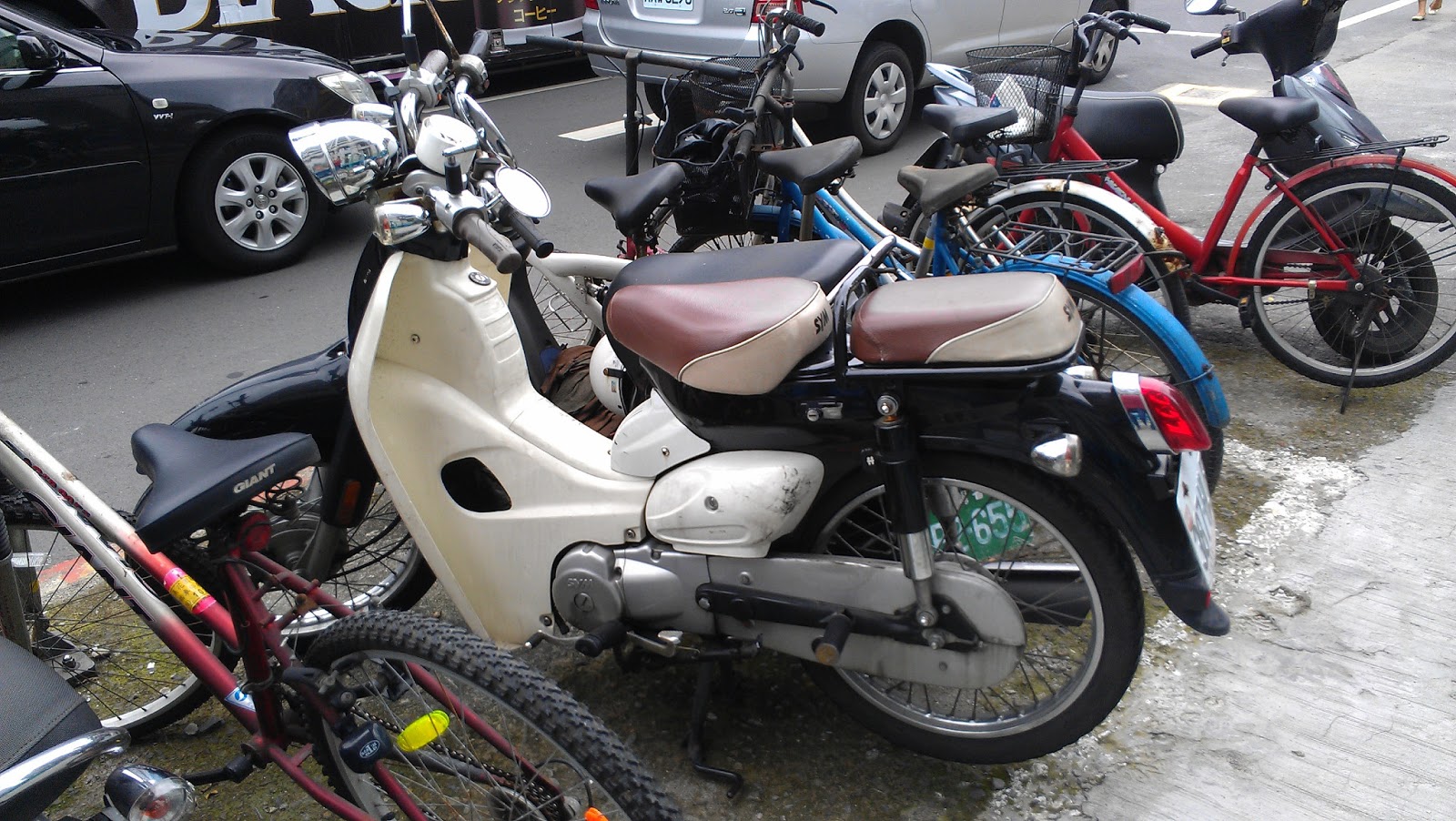 It has been raining a lot here in Taipei, Taiwan, so I've missed a few days of Symba sightings.  Here's one from just this (clear) morning.  Note the EFI module just below the seat.  In Taiwan, all motorcycles and scooters have to have fuel injection - it's the law.  I'm starting to think the side covers should be the same color as the frame; in this particular case, it would avoid the visible scuff marks on the white plastic.  Still, one has to remember that here, a Symba is a daily commuting vehicle, not something that is kept in a garage and groomed by an admiring enthusiast.  For that reason, spotting them on the streets of Taiwan is a testimony to their durability!
Posted by Harald Dahl at 10:09 PM No comments:

Another "Business Cub" sighting on the streets of Taiwan. 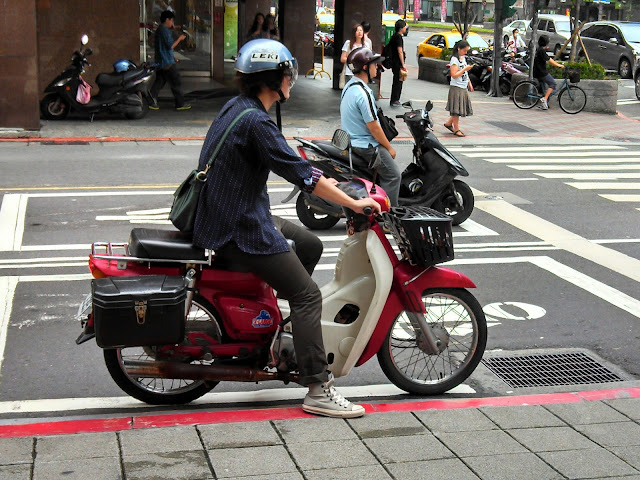 A Great Source for Symba Parts and Accessories

The new SYM USA dealer network is taking shape, albeit slowly - which is actually a good thing because slow growth generally translates into stable growth.  God knows we don't need a repeat of the Carter Brothers debacle! Nevertheless, Symba owners may find themselves at a loss over where to get parts and accessories.  Scooterseals is a small company in Taiwan that specializes in parts for SYM scooters and motorcycles, and they carry quite a few items for the Symba.  It's run by a expatriate Canadian fellow named Cam Purvis who has lived in Taiwan for years and knows how to track down quality Symba stuff locally that we foreigners typically wouldn't have access to.  His native language, of course, is English, and so communication is a breeze.  He ships worldwide, and his prices are reasonable!  Check it out!
Posted by Harald Dahl at 2:11 PM 2 comments:

It's not a big motorcycle - just a groovy little motorbike